When I decided to develop a blog focused on writing, I realized I was going to need a proofreader. (When you think, talk, and type as quickly as I do, things can go awry just as quickly.) So I asked Alexis—one of my best friends since 10th grade—to scour my posts for any potentially embarrassing mistakes. Even though she’s insanely busy, she agreed; she even said she was “honored” to review them.

After reviewing my first two posts, she headed off for a girls’ scrapbooking weekend. Somehow, the topic of my blog was raised. (One woman’s comment to Alexis: “Wow. There’s someone nerdier about grammar than you.”*) Shortly thereafter, one of her other friends mentioned that she needed “to pick up something for Jason and I.”

Now, I mentioned two blogs ago that I rarely correct my friends’ grammar. Alexis has no such qualms, especially given the fact they’d already been discussing grammar. “No,” she said. “You need to pick up something for ‘Jason and me.’” It was lighthearted, and everyone laughed. But a few minutes later, her friend continued, “I don’t know if that day will work for Jason and I.” Ouch. 0 for 2.

So which is correct?

Unless you’re Cookie Monster, you’re going to want to go with sentence #1 where “I” is the subject of the sentence.

However, it gets trickier when you introduce a second subject or object—especially a second object. Consider this pair of sentences:

I’m betting that most people would go with “I” because it “sounds right.” But the answer is “me.” Again, “Steve” and “me” both serve as objects of the sentence, and the subject is “dog.” An easy way to tell for sure is to eliminate the additional object and the conjunction “and” from the sentence, which brings you back to “The dog followed me to the kitchen.”

Now, if you’ll excuse me, me off to eat delicious cookie.

Favorite Word of the Week: Buoy

Favorite song of the week: “You and Me” by You + Me

*Just for the record, we’re about the same level of nerdy. In fact, we own matching “I’m Silently Correcting Your Grammar” t-shirts.

Recently, I was talking to a friend about what I should write about over the holidays. She told me about an Anton Chekhov short story called “The Exclamation Mark” in which Perekladin, a civil servant, is insulted after someone questions his ability to punctuate correctly. Affronted, he heads home and goes to sleep. All of this occurs on Christmas Eve. Can you guess what happens next?

In a parody of “A Christmas Story,” he’s visited by a series of ghostly punctuation marks—commas, colons, semicolons, question marks—all of which he banishes by thinking of appropriate uses for them. But then he’s’ confronted by the exclamation mark. He realizes, to his horror, that he’s never used one. He has no idea what it’s for.

Apparently this sets off an existential crisis for our troubled protagonist as he realizes nothing of any emotional significance has ever happened to him. But that’s not the point of this blog. The point is that, unlike Perekladin, most of us use the exclamation point far too often.  So if one punctuation mark has to go, let the exclamation point be that mark.

F. Scott Fitzgerald once said, “Cut out all these exclamation points. An exclamation point is like laughing at your own joke.” And that was at some point before his death in 1940, back when the norm was to use the mark sparingly. Today, it’s all over the place, in headlines, text messages, emails. “I’ll see you at the restaurant at 6!” “Your order has shipped!” “See you at the conference!” Those are just a few examples of sentences with unnecessary exclamation marks that have come my way recently. But the worst—the absolute worst—is the person for whom one exclamation point simply isn’t enough. “I can’t wait to see you!!!!!!!!!!!!” “That’s great!!!!!!!!!!!!!!” “I’m going to pick up some bread at the store!!!!!!!!!!!!!!!!!!!!!!!!” (That person also finds it difficult to stop with a single question mark: “Are you coming to dinner tonight???????????????????????”) It reminds me of when colleagues accidentally hit the “caps lock” button before typing an instant message—IT FEELS LIKE THEY’RE SHOUTING AT ME!!!

That’s not to say there aren’t occasions where an exclamation mark is warranted. Did you get your picture taken with Slash? Let someone in on a gridlocked expressway who failed to give you a courtesy wave? Realize that someone finished off that last bag of dangerously cheesy Cheetos? Then, by all means, express that joy, anger, or sadness appropriately. Otherwise, maybe stick with a period.

If you were going to be visited by the specter of a punctuation mark, what would it be, and why?

Word of the Week: Emote

Song of the Week: Have Yourself a Merry Little Christmas, by Judy Garland

I’m not entirely sure how I got a reputation for being a grammar Nazi. Yes, I have a master’s degree in writing. Yes, I was a proofreader before becoming a copywriter/copyeditor. And yes, I take a reasonable amount of satisfaction in pointing out grammar and punctuation mistakes in menus, signage, and the media. But I’m not one of “those people,” meaning I never correct my friends’ written or verbal mistakes.

But because I have this reputation, I often receive e-mails with attachments like the one contained here. (And I love receiving them, so keep sending them!) 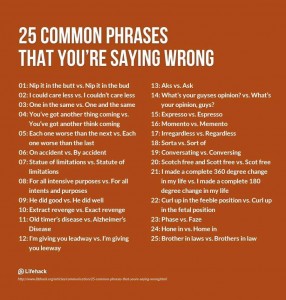 I’m sure we’ve all been privy to these misuses before. My favorite is “I’ve made a complete 360-degree change in my life,” probably because I also have a reputation for being terrible at math. (I take slight umbrage to this reputation, by the way. Sure, I suffered through geometry back in the day, but I can add, subtract, multiply, and divide with the best of them.) I also appreciated seeing “home” vs. “hone,” a topic about which I’ve had many debates over the years.

But I’d like to add one to the list: “compliment” versus “complement.” People mistake these all the time. In one example from last week, I came across the following sentence: “They focus on residential maintenance and repair with complimentary companies like Mr. Rooter®, Mr. Electric®, and Mr. Appliance®.” Unfortunately, unless Mr. Rooter® provides its services for free—which is highly unlikely—or floods its customers with effusive praise, it’s not a “complimentary” company. It’s “complementary”—or a counterpart—to Mr. Electric® and Mr. Appliance®.

Now, if you’ll excuse me, I’m going to go curl up in the feeble position.

Favorite word of the week: umbrage

Favorite song of the week: “Compliments,” by Band of Horses

At Plante Moran, we have a tradition where departing staff members write “green memos” to say goodbye, thank those who made an impact on them, and disclose what they’re doing next. Recently, a staff member with whom I worked closely left the firm, and she mentioned me in her memo: “Mindy Kroll — you are this firm’s secret weapon….I’ve said it a million times, I love your brain! I hand you a bag of rocks, and you turn them into diamonds.”

Nice, right? It actually made me tear up a bit. I’m a pretty humble person, and I’m not great at accepting compliments. But I do agree with the rocks into diamonds part. I sometimes refer to myself as “Mindystiltskin,” for I have the ability to convert lines of messy, questionable prose into a well-organized, understandable and—on a good day—engaging piece of writing. Something akin to gold.

So when I decided, recently, that I’d like to have my own blog, developing one around writing and grammar seemed a good fit. I had other ideas; I thought Steve and I could have our own music blog, or my friend, Lisa, and I could write about our struggles with technology or love of the 1980s. But this makes the most sense.

When I told my colleague, Dan, that I was considering this blog, his response was typically pragmatic: “You should have a blog. I should, too. It’s good for our resumes.” The next day—without any prompting from me—he designed this site for me.* (You didn’t think I did this myself, did you? Like I said earlier…technology struggles. So many technology struggles.)

This doesn’t mean I won’t occasionally write about other things. As the author of this blog, I reserve the right to write about whatever I want. I hope you enjoy it.

Word of the week: whorl

Song of the week: “Diamonds and Pearls,” by Prince